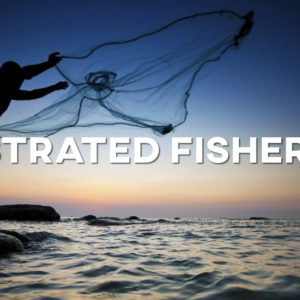 Do you ever get frustrated?  There are all sorts of things in our lives that can cause frustration.  I deal with it constantly.  For this reason, one chapter in Max Lucado’s book “In the Eye of the Storm” really struck home with me.  He makes a relevant point applicable to most Christians.

In the chapter, Max writes of a long-anticipated fishing trip that was to take place during a break in his college schedule.  Big plans were made, class work completed, camping gear was packed until, at last, the day of departure had arrived.  Upon setting up camp, a cold front moved in.  The first day of the fishing trip was spent inside a camper trying to keep warm, reading Reader’s Digest and playing monopoly, but the anticipation of tomorrow’s possibilities were still strong.

Unfortunately, tomorrow was more of the same, as was each following day.

With each day, the want-to-be fishermen became more and more frustrated.  Pretty soon, little things the others did began getting on each of their nerves, until relationships became strained.  Finally, their hopes for tomorrow’s possibilities were spent and all three were more than ready to pack it in, having never gotten their lines wet.

Max Lucado’s point was that they were supposed to be fishing, yet they were not fulfilling their purpose for being there.

In much the same way, we in the church, find ourselves frustrated with people and situations within the church.  We are called to be fishers of people, yet when we are not fishing, we become preoccupied with other things in life, we become frustrated often with one another.  We naturally become frustrated when we are not fulfilling that which we are meant to be doing.  We find ourselves, nit picking about non-essentials, while permitting those things of eternal significance to be left undone.

I look at all the ministries of Tyner U.M.C. and the many people of the Tyner family as well as the resources available to us.  Whether it be serving a ministry team within the church, keeping children, cleaning the kitchen, preparing donuts for Sunday morning, knitting prayer shawls, feeding the homeless, teaching children, youth, or adults, Tyner Travelers, and the list goes on and on, all are needed for most effectively fishing for people.

All four gospels record Christ calling his disciples and telling them that they will be fishers of men.  We are Christ’s disciples as well.  Be fisher’s of men, women, and children.  “You catch ‘em, He’ll clean ‘em.”  So, how’s your catch?  Or are you a frustrated fisherman?