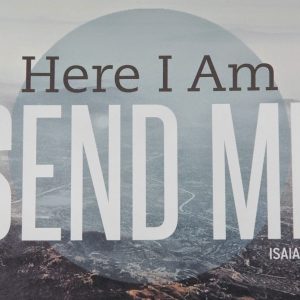 “Holy, holy, holy is the Lord Almighty;
the whole earth is full of his glory.”

4 At the sound of their voices the doorposts and thresholds shook and the temple was filled with smoke.

6 Then one of the seraphim flew to me with a live coal in his hand, which he had taken with tongs from the altar. 7 With it he touched my mouth and said, “See, this has touched your lips; your guilt is taken away and your sin atoned for.”

8 Then I heard the voice of the Lord saying, “Whom shall I send? And who will go for us?”

“Until the cities lie ruined
and without inhabitant,
until the houses are left deserted
and the fields ruined and ravaged,
12 until the Lord has sent everyone far away
and the land is utterly forsaken.
13 And though a tenth remains in the land,
it will again be laid waste.
But as the terebinth and oak
leave stumps when they are cut down,
so the holy seed will be the stump in the land.”